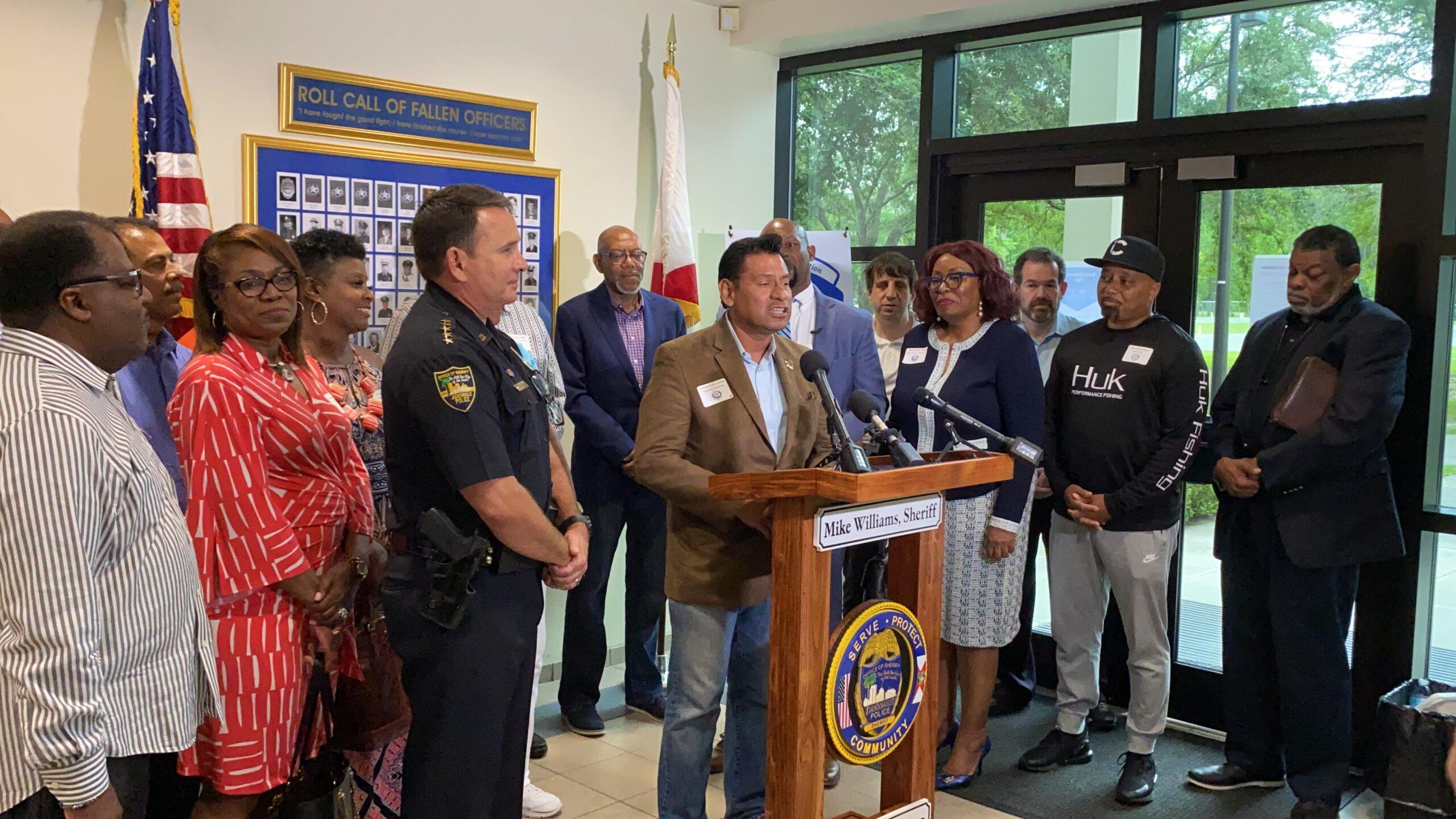 MovementForward, Inc., a modern, inclusive social change organization working  to protect, promote, and advance the civil and human rights of all people, in partnership with the Jacksonville  Sheriff’s Office announced the Jacksonville launch of its signature program One Congregation One Precinct (OneCOP). The goal of the OneCOP initiative is to deepen engagement between local law enforcement and the  communities they serve through houses of worship. As a part of the launch, Jacksonville Sheriff’s Office and  MovementForward, Inc. will bring together leaders from the Jacksonville faith-based community for an  opportunity to experience in-person officer-civilian scenarios that include mock traffic stops, simulated  interactions and reaction drills. Lastly, Jacksonville Sheriff’s Office has invited every senior faith leader who  presides over every local house of worship to attend a launch luncheon.

Sheriff Mike Williams offered, “I have said time and time again, ‘During a crisis is NOT when relationships can be  built. But rather it is through the commitment to open conversations happening routinely BEFORE the crisis occurs  that makes all the difference.’” He went to say “Jacksonville has a rich roster of leaders in every community and  the OneCOP Program is seamlessly designed to make every house of worship a force multiplier in how the men  and women of the Jacksonville Sheriff’s Office can directly engage with those we are so proud to serve. I look  forward to seeing the amazing connections made and long-time relationships bloom.”

“Police-community tensions are at an all-time high. Without a doubt, America needs a resolution to address the  systemic racism at the heart of many of society’s wrongs, including the racial inequities in our criminal justice  system,” said Rev. Markel Hutchins, CEO of MovementForward, Inc. “Police reform will not happen overnight, and  the long-term solution will require a substantial effort to address the grievances and negative perceptions civilians  have about law enforcement. Collaborations between police agencies and local groups–especially faith-based  organizations–are invaluable force-multipliers for creating safer and more engaged neighborhoods.”

OneCOP is a proactive rather than reactive approach to addressing tensions around police-involved incidents as  well as ongoing crime and violence in local communities. OneCOP has several objectives that incorporate the six  pillars outlined by the former Task Force on 21st Century Policing of the U.S. Department of Justice – Office of  Community Oriented Policing Services:

ABOUT THE JACKSONVILLE SHERIFF’S OFFICE

Located in Duval County, Florida, the Jacksonville Sheriff’s Office (JSO) is an accredited agency comprised of  approximately 3,500 employees; including nearly 2,000 sworn police; corrections and civilian personnel. As one of the premier law enforcement agencies in the nation, JSO provides rigorous training, maintains the  highest professional standards, and offers a technologically advanced academy to train top quality employees to  serve and protect a community of nearly one-million citizens. Under the leadership of Sheriff Mike Williams, the  members of the agency strive for a crime-free environment, driven by partnerships with empowered citizens,  fostering a vibrant community and the success of all individuals.

MovementForward, Inc. (MFI) is a modern, inclusive social change organization working to protect, promote and  advance the civil and human rights of all people. It is building a multiracial, multifaceted and intergenerational  movement for social justice, economic parity, educational equity, racial reconciliation and global peace by bringing  diverse people together to solve problems. Founded in 2015 by emerging faith leaders in Atlanta, MFI provides this  generation of Americans a conciliatory voice to offer programs, projects, activism, empowerment opportunities,  and targeted issue campaigns to advocate for one standard of justice regardless of race, class, gender, religion,  orientation or immigration status.

ABOUT ONE CONGREGATION ONE PRECINCT (OneCOP)

While our MovementForward, Inc. headquarters have been closed here in Atlanta, Georgia due to health concerns surrounding the coronavirus, I...

Is There a Third Way?

One of the age-old questions in advocacy is whether it's more important to be pragmatic/realistic or idealistic. These two poles...

Because of the direct contact with communities that first responders and law enforcement officials have, their task is to learn how to...